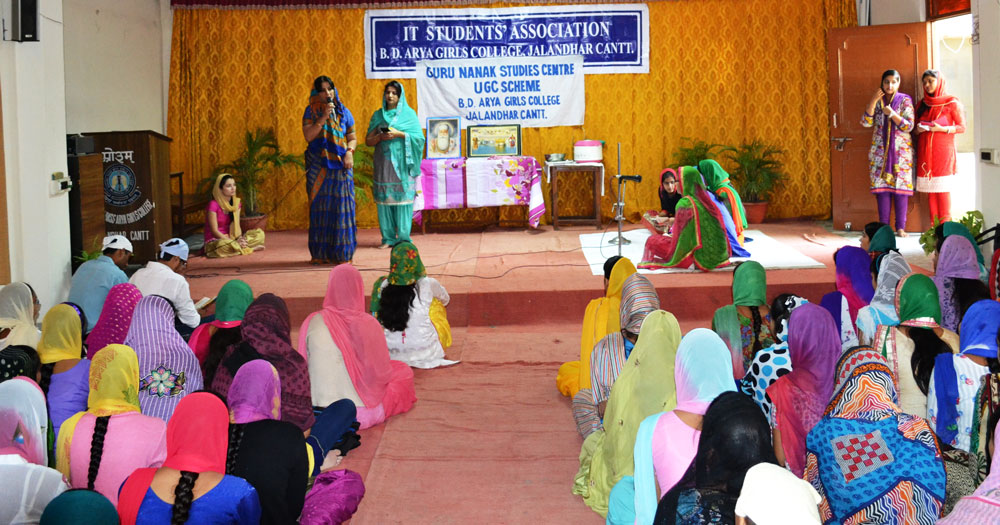 The Guru Nanak Studies Centre has been established in the college to acquaint the students and the people with the philosophy and ideology of Guru Nanak Dev Ji whose teaching have contributed a lot towards human dignity and human rights. 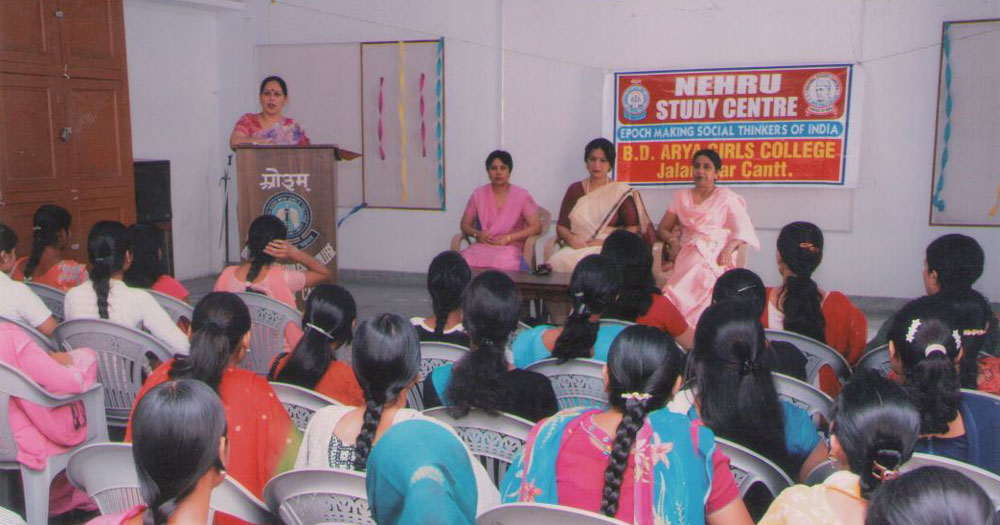 The Nehru Studies Centre of our college works with the spirit enshrined in its motto – Service of India. This study centre, the first of its kind in Punjab, encourages the students and teachers to take up studies and research work on Nehru. Various community development activities are also initiated by the Nehru Studies Centre. 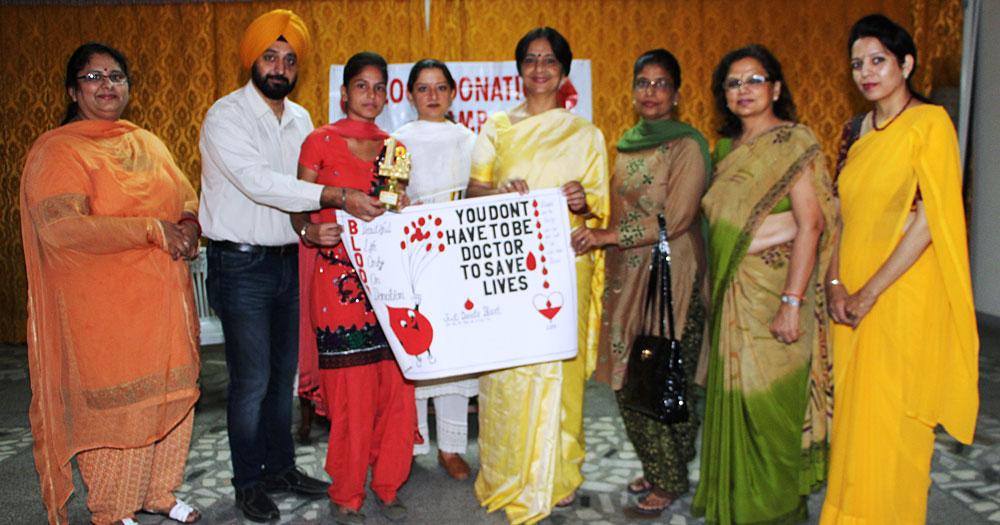 The college has established a ‘Red Ribbon Health Club’. Various activities like Blood Donation camp, Eye-checkup camp, Aids Awareness Programme, Dental Checkup etc. are done under the banner of this club. From time to time, rallies on burning social issues are also organized to spread awareness about environment, female foeticide , AIDS etc. Extension activities like Health Checkup, Hemoglobin Checkup camp, Blood Sugar Testing and Blood Donation etc. are taken up by this club in collaboration with Civil Hospital and other NGO’s. 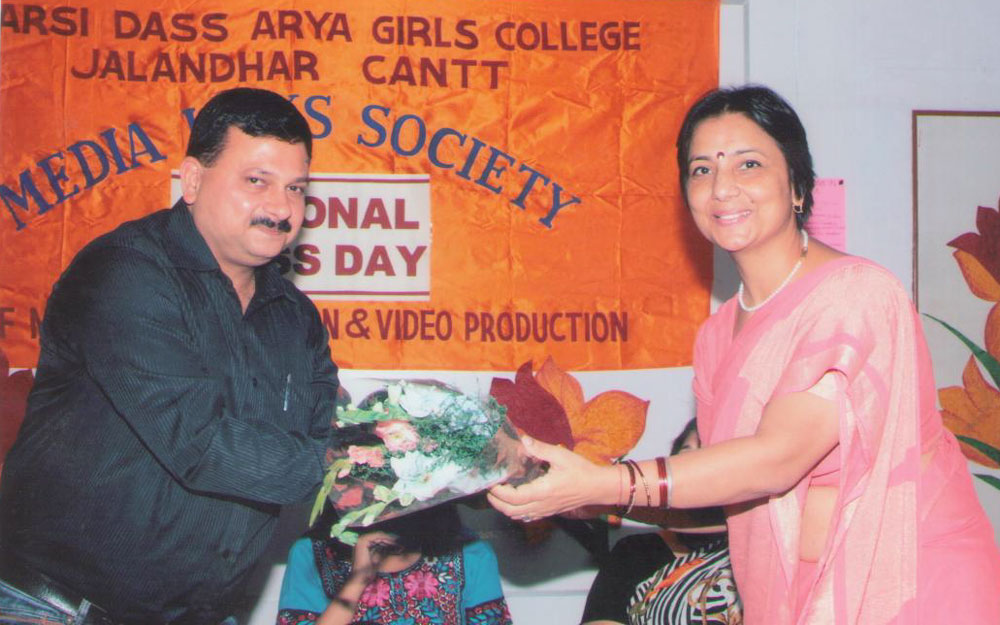 The English Literary Society organizes a large number of activities like debates, declamation, poetical recitation, symposium, quiz, seminar and paper- presentation to enhance the language skills of the students. 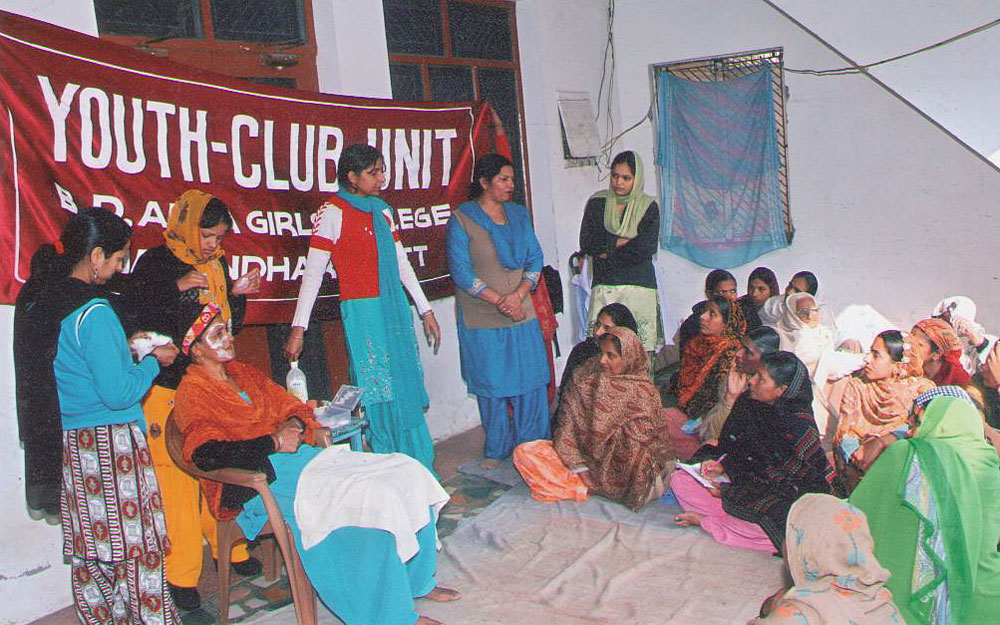 The unit of Youth Club of our college is affiliated to the Directorate of Youth Services, Govt of Punjab. Youth Club is an organization, which aims to develop the personality of an individual. It inculcates in the students the feelings of brotherhood, affection and compatibility. It helps them in developing the qualities like leadership, discipline, responsibility and selfless service.
The students especially from backward and rural areas get more benefits as they are provided with wide exposure to the outer world. The members of club undertake various projects and youth development camps that are very fruitful for them.
The activities related to the youth are the regular feature of our college. Since 1996, the Youth Club started functioning under the trained teacher-in-charge Mrs. Surinder Pal Kaur. Regularly, she attends the various camps organized by the Directorate of the Youth Services, Govt. of Punjab. Every year our students participate in Youth Leadership camps. Ten students of our college attend an annual camp at Dalhousie, organised by Youth Service Department, Chandigarh and Youth Welfare Department, Guru Nanak Dev University, Amritsar. 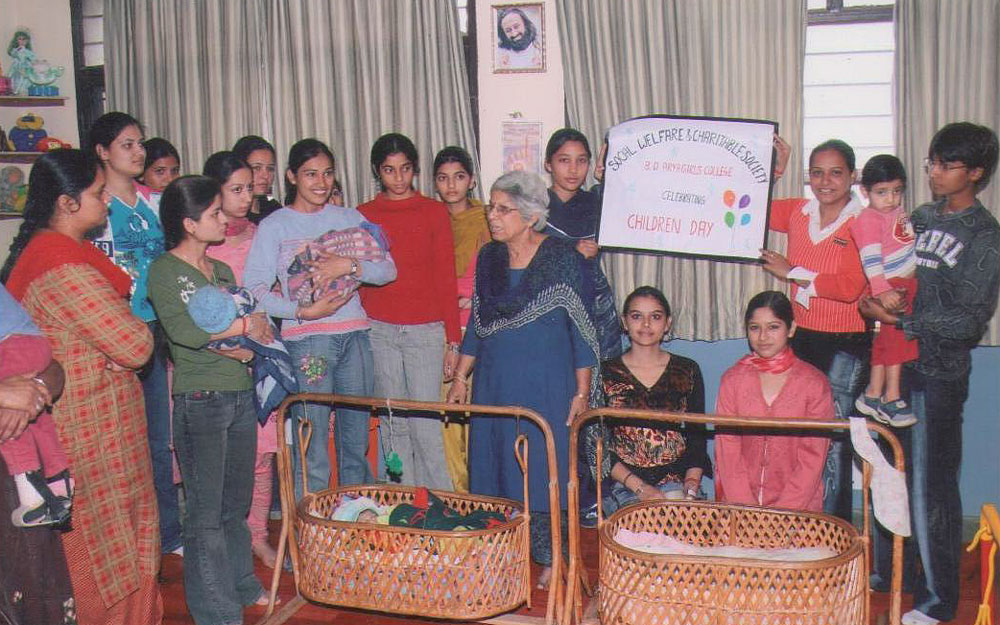 Social welfare and charitable society came into existence in 2005. Before that, college was carrying on charitable work and activities regularly but in an informal manner. Visits to old age homes, orphanages and juvenile homes have been a regular feature of the college routine. Students have always been encouraged to come forward for charitable works. Social welfare and charitable society has been formed to streamline the activities for social development and upliftment. 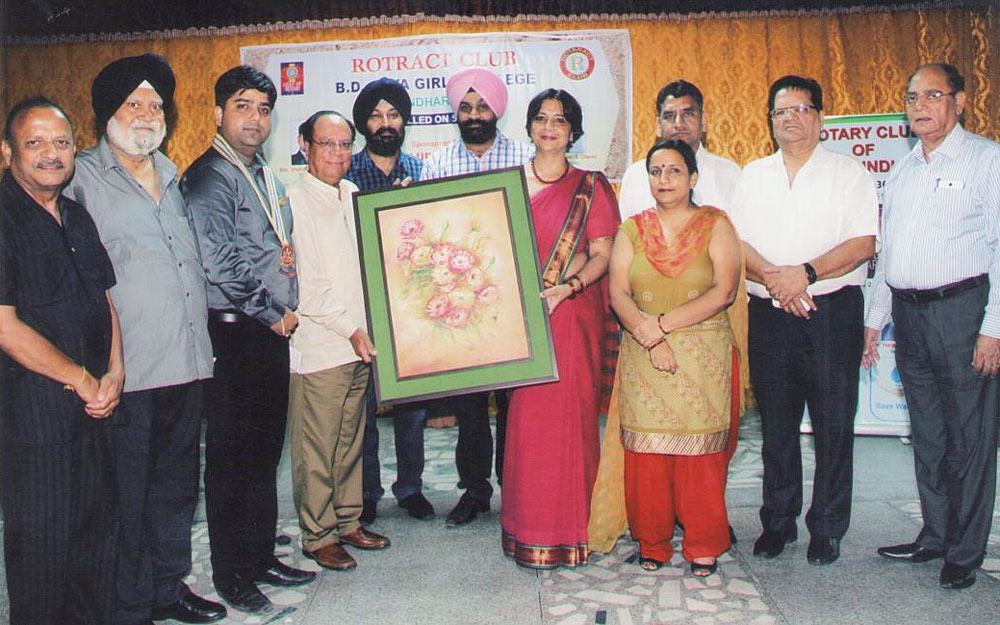 The Rotaract Club of B.D. Arya College was introduced under the Rotaract Programming of Rotary International. The Club works in the vicinity of sponsory Rotary Club of Jullundur. Service for love and peace are the objectives of the Rotary. Our students benefit the society through the activities of this club. Their horizon of experience widens and they learn to serve the humanity and work for a greater cause to make this world a better place to live in. Motto of Rotary is act with consistency, credibility and continuity. The projects like awareness rallies, helping the needy and deserving students, poster making, card designing, hair styling and make-up, public speaking, singing and dancing contests etc are organized by this club. 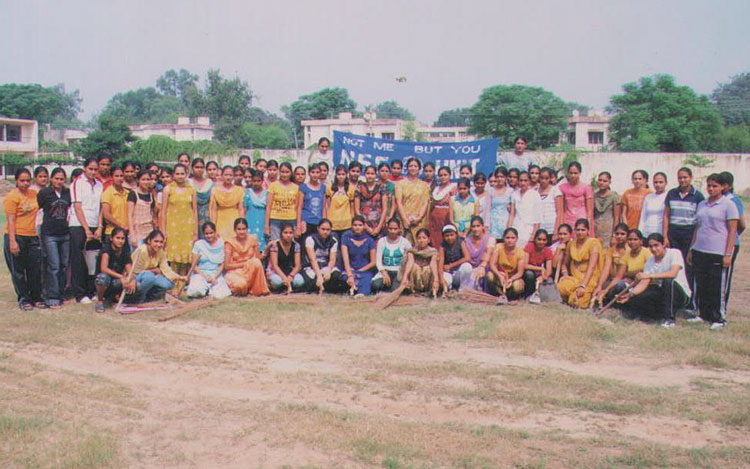 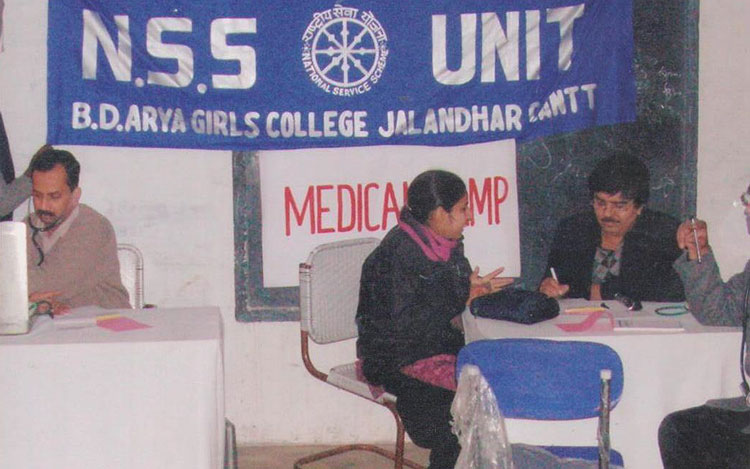 The College has two N.S.S. units and 200 students are enrolled every year. The N.S.S. volunteers are efficiently trained and supervised by the Programme Officers. The object of National Service Scheme is to educate the youth in community service and to bring about social awareness and consciousness regarding the environment. The training is imparted to the student during special camps and one day camps throughout the year. Apart from general cleanliness and maintenance of the discipline, NSS volunteers undertake many community welfare projects like work in rural and urban areas, emergency relief, institutional work, literacy campaign etc. The students are advised to join N.S.S. so that they learn to contribute towards national reconstruction. 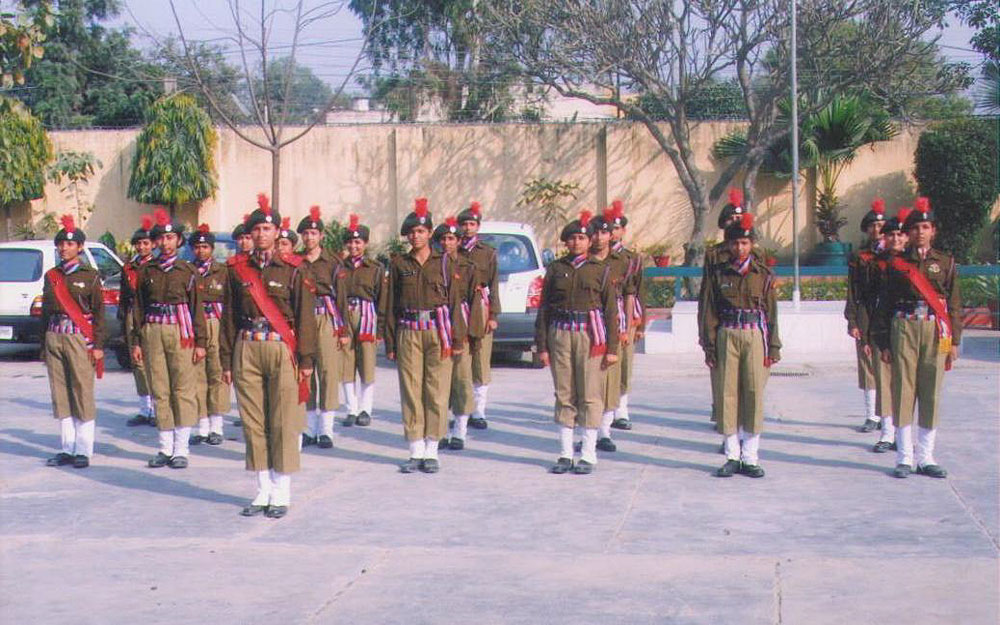 N.C.C. came into existence in 1948. Late Prime Minister Pandit J.L. Nehru thought of an organized Youth Wing for the country after Independence. He wanted to guide the Youth of the country to become useful citizens. He chose universities, colleges and schools as the area of such activities. Thus the Central Govt. had passed an act in the Parliament which was called as National Cadet Corps. Act which was passed on 16th July, 1948 and called as ‘The N.C.C’. The main aim of N.C.C. organization to awake the Youth about their responsibilities towards their nation and to make them ideal citizens. So, this college makes an effort to fulfil this aim. N.C.C. was started by our Ex-Principal, Advisor and Director Ms. Swaraj Mohan in 1981. 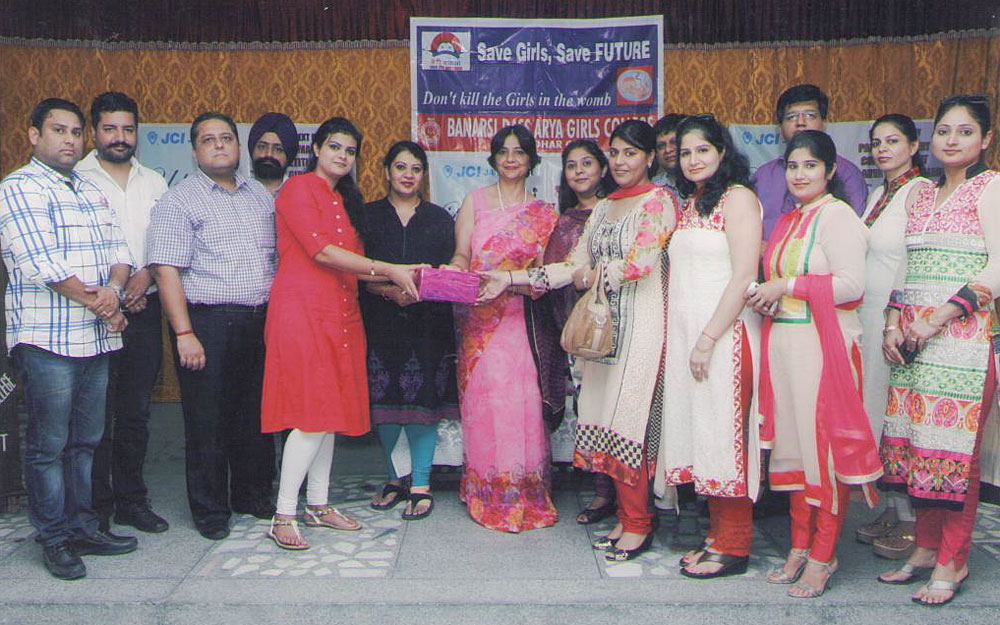 Jaycees is an organization which aims to bring the youth in forefront. It inculcates in the youth the spirit of confidence, courage and brotherhood. Various activities are carried on by this club. It takes up the projects for personality development. Here Youth is provided a platform to exhibit their talents. In B.D.Arya College, there is a Junior Wing of Jalandhar Jaycees which organizes various programmes every month to encourage the students and gives them a bright way to develop their personalities. For last so many years the Junior Jaycees Wing of our college has been declared the Best Wing.

The Enlightened Women’s Club of B.D.Arya College was officially formed in the session 2006-07. However, even before the formation of this club, the college has always been sensitive to women-related issues. The very inception of this college was based on the noble vision of empowering the students of both rural and socio-economically backward areas of Jalandhar Cantt. The guiding principle of the college is “Priyam Sarvsya Pashyat”, meaning ‘welfare of all’ with special focus on women empowerment.

Aims and Objectives Our Indian culture has given a woman a place of high esteem and reverence. She is the teacher of mankind and nation. On her shoulders, rests the responsibility of founding an ideal nation and civilization. Hence, when we undertake to run an institution for the girls as well as for boys, we endeavour not only to teach women but we teach the whole family and consequently prepare a nation of worth and virtues, which is truly patriotic and progressing. In the era of spiritual and moral bankruptcy, this club strives to cultivate in the hearts of the young students real ethical values, absolute truth and goodness.

We aim to:
(i) Work for women empowerment through education with special focus on boys and girls from rural areas.
(ii) Create among an awareness regarding social evils like female foeticide, female infanticide, dowry,drug addiction, child right and women right etc. 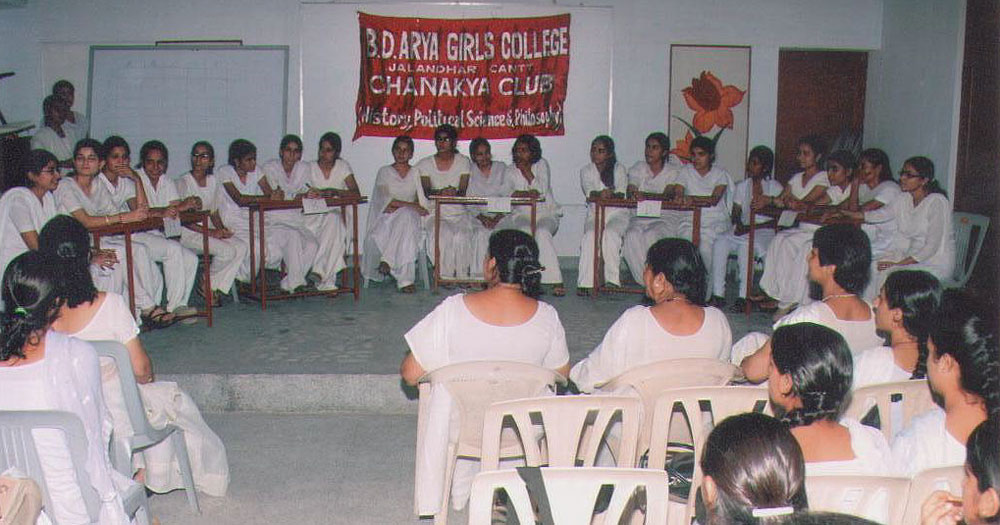 Chanakya, as the name itself symbolizes the best of the Politics, the perspective is to visualize the life which creates history.The amalgamation of three branches of Social Sciences has come up with spectacular results in the form of the project Chanakya.Philosophy gives a wider range and sets the point of view of life. Political Science deals with the way how to lead a life and History reflects the inner self of a man’s consciousness. So this cluster of three subjects channelize and show us the new horizons. 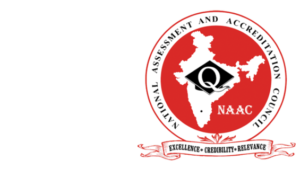